… while insisting it was not intoxicated, could not explain its nudity.

A couple years back, I posted an ill-tempered screed in response to an Andrew Sullivan rant about the federal budget, using the invaluable Historical Tables document emitted yearly by the Office of Management and Budget of Your Federal Government. They released this year's budget documents today, and what better time than to recycle that post? I'll eliminate the references to Sullivan (which you can read, if you want, in the old post), and update the data and my opinions appropriately.

I looked at Table 1.2, which contains total budget receipts and outlays as percent of GDP back to 1930. Here's a graph of that data since 1977; post-2006 numbers are estimates: 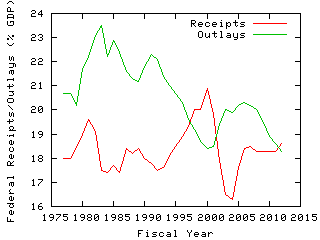 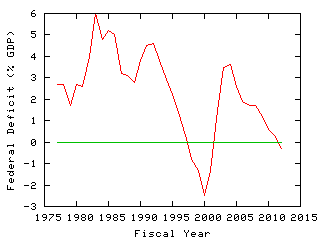 Note that, as befits a total non-economist, this is about the most simple-minded thing I could have possibly done. But the percent-of-GDP seems appropriate for historical comparison; it seems to be (arguably) a good measure of what we can "afford"; and, if you believe deficits "damage the economy", then it's a pretty good proxy for the level of damage.

Here's some stuff I noticed:

But my main point is the same as it was in 2005: Look at the graphs, and ask yourself: where do you want the lines to go? What percent of GDP do you think the Feds should be spending in (say) 2030? Let's ignore, for now, the issue of what they should spend on: entitlements, defense, edyookation, … Fight about how to cut the pie after we decide how big it is. Similarly, ignore the issue of where the money comes from; we can also debate that after it's decided what the target is.

That's a simple question, but it's not simplistic. I'd rather this "simple" question got debated openly before anything else; once we've figured that one, we can tackle the "sophisticated" ones. Why aren't presidential candidates being asked such questions?