… has a mind to stop living, and go shopping instead.

I have a weak, leaning negative, opinion on immigration "reform". People I like are on both sides. Mostly they have decent arguments.

But the pro-"reform" side is getting desperate, seeing their "comprehensive" legislation going nowhere, and desperate people make progressively poorer arguments.

Case in point is a recent "Right Turn" blog post from Jennifer Rubin, the Washington Post's designated right-winger. The title: "Immigration polling tells Congress to act". All it's missing is an exclamation point. Act, Congress, act!

Jennifer's post presents the results of a recent poll carried out by Harper Polling, sponsored by groups who would like the stalemated legislation passed: Partnership for a New American Economy (PNAE), the Business Roundtable and the National Association of Manufacturers. Compare with PNAE's press release, which has links to the detailed poll results (to which I refer below). Jennifer echoes this consortium's talking points with zero skepticism. Skepticism is certainly warranted by a poll that just happens to support the legislative goals of its sponsors. (And, not coincidentally, coincides with Jennifer's own preferences.)

Jennifer also flings drive-by spitball insults at the opponents of the legislation: they are "loud but in the distinct minority". Their worries that Obama can't be trusted to implement and enforce the border security measures mandated in the bill? That's an "excuse for not acting" and it "is not fooling anyone." Her clear implication is that the other side is acting in bad faith, and rudely to boot.

The survey of likely voters finds, for example, that the vast majority of voters believe the system is in need of fixing.  86% of Republicans believe Congress should take action to fix the immigration system. 79% of Independents agree.

One of the least meaningful polling questions ever is to ask the respondents whether something obviously dysfunctional should be "fixed". And make no mistake: the question generating the response that so impresses Jennifer was just that vague:

When thinking of the issue of immigration, do you believe the United States immigration system is functioning the way it should or is in need of fixing?

Arrgh. Again, who is against something being "fixed"? The amazing thing is the 7% of respondents who said the system is "functioning the way it should". (Another 8% were "not sure".)

But it is fallacious to imagine that the pro-fix "vast" majority even agree on what needs to be "fixed" in immigration policy, let alone what tactics should be adopted to "fix" it. The poll implies a false near-unanimity where none exists.

(Similarly for "reform", which the poll asks about too. Unsurprisingly, everyone's for "reform". Because doesn't reform, by definition, "fix" things?)

As for the substance of reform the so-called principles set out by House leadership — secure our borders, expand visas for high-skill workers and farm workers, provide an employer verification program, allow DREAMers to earn citizenship, and provide visas to live and work here legally to undocumented immigrants without a criminal record who pay penalties and back taxes – get support from 60 percent of voters.

Would you support or oppose an immigration reform plan that secures our borders, expands visas for high-skill workers and farm workers, provides an employer verification program, allows young persons brought to the U.S. illegally by their parents an opportunity to earn citizenship, and provides visas to live and work here legally to undocumented immigrants without a criminal record who pay penalties and back taxes?

So, suppose you only strongly support securing our (manifestly insecure) borders, and don't care about or oppose that other stuff? Is it plausible that you might average things out and pick "Somewhat support" from that list of options? I think so.

A more meaningful result would have been obtained if the pollsters asked a series of questions about the support/opposition for each individual element of the so-called comprehensive reform. I suspect the support for "secure our borders" would be vastly higher than for the other measures. And I further suspect that's precisely why the pro-"reform" group didn't pose the questions that way: they knew they wouldn't get the answers they wanted.

Jennifer/PNAE's purpose, of course, is to convey a sense of panicked urgency among House Republicans to push the legislation through ASAP. So the funny thing is the response to the poll question they are not publicizing:

Which of the following issues is most important in deciding how you will vote for Congress this year: The Economy, Jobs, Spending, Obamacare, Immigration, National Security, Taxes, or Moral issues like abortion and gay marriage?

"Immigration" is such an important issue, it came in at a solid fifth place: 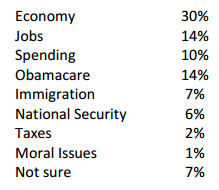 OK, so people are really concerned with other stuff. But surely if we ask them:

And, what is the NEXT most important issue to you?

Well, no. Still in fifth place: 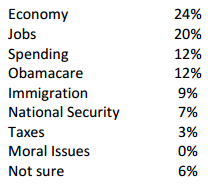 So (executive summary) 84% of the likely-voter poll respondents did not rank immigration in their top two issues in judging how to vote for Congress in the upcoming election. You wouldn't expect supporters of immigration legislation to promote that result, and they don't. And neither does Jennifer Rubin.

[Note: I posted a comment on Jennifer's blog, but it got flooded out quickly by an array of commenters that hate Republicans and/or Jennifer. So you get my revised and extended comments here instead, sorry.]

I was somewhat surprised at how much I liked this movie. The overall critical reaction was mediocre. The IMDB raters have it as a ho-hum 7.4 (as I type). But (apparently) the movie plucked all my emotional strings, so there you go. It stars Ben Stiller (who also directed) as Walter, and he's dead solid perfect.

It's based on the classic short story by James Thurber. As in the story, Walter is prone to zoning out while he daydreams various scenarios where he's movie-hero brave, capable, and witty. ("Women want him, men want to be him.") In the short story, that's pretty much it. In the movie, this results in a couple hilarious scenes, but it's only the beginning.

Movie Walter is not Thurber's henpecked husband; instead, he's a middle-aged schlub working as a "Negative Assets Manager" for Life magazine. There's a play on words there, but what he does is take care of the photographic negatives in the Life archives.

Walter has no nagging wife, but has other problems: Life (in this sorta-alternate universe) is about to publish its last dead-trees issue. Legendary photographer Sean O'Connell (Sean Penn) has submitted what he claims is the perfect photo for the final issue's cover, but the negative (O'Connell is a dinosaur who still shoots on film) has gone missing. The boss appointed to oversee Life's demise is a sneering bully and makes Walter personally responsible for getting the picture.

Walter is also infatuated with new employee Cheryl (Kristen Wiig); he has a complicated plan to arrange a "meet cute" through a computer-matching site, but the total lack of anything interesting in his life is defeating the site's matching algorithm.

Walter gulps hard, and sets out on a mission to track down the elusive O'Connell and his missing picture. This turns out to present awesome globe-trotting challenges, and Walter must use his (previously only fantasized) bravery and wits in real life.

I have to mention this sentence from movie's the Wikipedia entry:

Later sequences set in Stykkishólmur were actually filmed in Seyðisfjörður.

… lest you be misled.