Back when your blogger was a freshman physics major, slightly over a half-century ago, the lab had a textbook by the late Philip R. Bevington, Data Reduction and Error Analysis for the Physical Sciences. I still own my copy, one of the only textbooks I saved from those days. It cost a cool $5.95 back then. Now, Amazon has the third edition; you can rent a copy until January for $20.61, or buy a used copy for—eek!—$93.24.

Anyway, right on page three, there was a brief discussion of "Accuracy vs. precision". It begins:

There is considerable confusion among students as to the meaning of and difference between the terms accuracy and precision. To add to the confusion, Webster defines them equally. In scientific investigation, however, they are assigned distinctly different meanings which must be kept separate.

And there follows three longish paragraphs describing the difference. I remember reading that section. And then rereading it a couple more times.

Ah, if only Prof Bevington had this xkcd cartoon to illustrate: 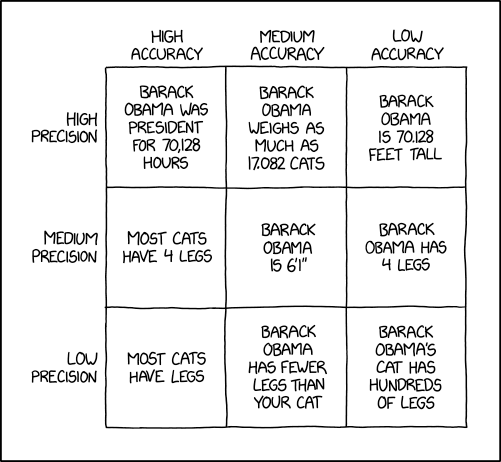 Mouseover: "'Barack Obama is much less likely than the average cat to jump in and out of cardboard boxes for fun' is low precision, but I'm not sure about the accuracy."

So I watched the Lin-Manuel Miranda musical Hamilton last year and found it interesting enough to put this book on the non-fiction TBR stack. (Pun Daughter turned out to have a copy.) While Miranda's play took a lot of, um, artistic liberty with the details of Hamilton's life, this book is probably as accurate as we're going to get.

And it was quite a life. Ron Chernow does a good job (as far as I know) in describing the events in Hamilton's life, which turns out to be a good way to discover the history of the early United States; Alex was involved in that up to his elbows. Born ("out of wedlock") in the West Indies, his ambition, diligence, and intelligence soon became obvious, despite his scandalous origins. He was sent to the American colonies in 1772 for a formal education, and he never looked back.

What followed was an immersion (and active participation) in revolutionary turmoil. Again, his talents were such that he found himself as George Washington's trusted chief of staff. His war experiences led him to despise the loose confederation of the colonies, and he became an active advocate for a stronger central government with a powerful executive branch. (Some accused him of being a Brit-loving monarchist.) But he took an active hand in designing the Constitution we all know and love, took a lead role in getting it ratified (you've heard of the Federalist Papers?), and once the new government kicked in, was made Secretary of the Treasury in Washington's cabinet, And… well, there's more.

Including a lot of controversy, that would (eventually) prove fatal. Hamilton found himself in contention with (seemingly) nearly everyone you've heard of in the period, especially the "Republicans" of the day: Jefferson, Madison, et. al. These guys really didn't like each other.

I couldn't help but think about parallels to our present day political controversies. Chernow says the political parties of the day were largely personality cults. The presidential election of 1800 was especially nasty, with skulduggery, talks of extralegal reversal of the electoral results, with threats of violence. And even dark mutterings of secession. By the north.

Nobody seems to get shot these days, though. At least nobody famous. And duels don't happen any more, do they?