President Obama plans to convene his Cabinet for the first time today, and he will order its members to identify a combined $100 million in budget cuts over the next 90 days, according to a senior administration official.

Many, many bloggers are posting this graphic in response, and why should I be any different: 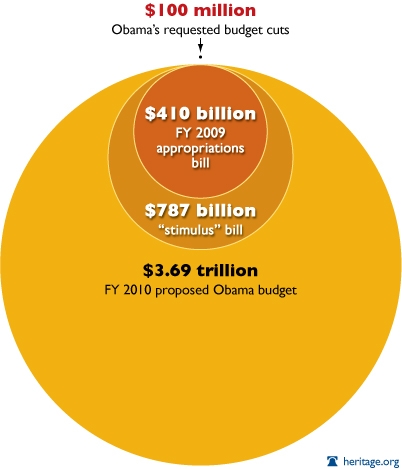 Clicking will take you to the Heritage Foundation. If you prefer illustrative words, Genius Harvard Econ Prof Greg Mankiw has them:

To put those numbers in perspective, imagine that the head of a household with annual spending of $100,000 called everyone in the family together to deal with a $34,000 budget shortfall. How much would he or she announce that spending had to be cut? By $3 over the course of the year--approximately the cost of one latte at Starbucks. The other $33,997? We can put that on the family credit card and worry about it next year.

And don't forget: President Obama's giving his minions a mere 90 days—until mid-July—to locate where that little saving-dot might come from.

… noting that $100 million doesn't even shave a pixel off those red bars.

President Obama: always trying out new ways to insult your intelligence. What a scamp!