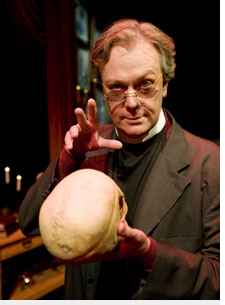 This morning's edition of my local paper, Foster's Daily Democrat, serves up the deep thoughts of Bruce Mallory, a professor in the Education Department at the University Near Here:

Following Saturday's shootings in Tucson, University of New Hampshire professor Bruce Mallory has deemed the incident yet another example of how society claims to be civil, yet goes about solving problems through acts of violence rather than through informed discussion.

I'm not sure how much of this massive stupidity can be attributed to Professor Mallory, and how much is due to paraphrasing by the Foster's reporter. Unfortunately, things don't get much better in the remainder of the article, so I'm tending toward absolving the reporter.
Mallory, noted for his experience in how societies operate, said society has become increasingly more divided in terms of politics and ideologies throughout the past few years.

That explains why lunatics never shot at prominent public figures in America before January 8, 2011.

As a result, he said society has seemed to have lost its concern with resolving issues and differences through constructive dialogue. Though it most certainly doesn't stand as an excuse, this, the professor noted, is key to understanding the actions of the individual who shot Congresswoman Gabrielle Giffords, killed six and injured another 13 others.

Mallory and others believe that divisive, adversarial politics are also being played out on the national stage, at an unprecedented level of intensity. He is a proponent of what is being called "deliberative democracy," a process of informed and civil political discourse that ideally leads to a greater consensus and more rational collective decisions.

When you're that invested in a belief, everything gets viewed through that prism. And you wind up speaking blithering claptrap, shilling the magic elixir you just know would have prevented the violent acts of this dangerous nutball. Back to the Foster's article:

He [suggested the] suspect in the shootings, a 22-year-old male, may have lost touch with reality and was threatened by those who he considered different or to have different beliefs. Noting that acts of violence like the incident in Arizona are seemingly becoming more and more frequent, which Mallory said gives him a reason to believe that such acts are becoming the norm.

"The more this happens, the more our country feels like those undemocratic, uncivil societies where assassinations, tribal conflict, and oppression by the powerful few are the norm," said Mallory.

A stunning insight: Jared Lee Loughner might have had psychological problems. Gee, ya think?

Also note the weasel-wordings: "seemingly", "reason to believe", "feels like": kids, if you want to be a respected academic, this is how you try to sneak in assertions for which you have no real evidence whatsoever.

He stressed that it's a possibility that words are being used less and less as a means to tackle an issue because of how heavily armed the United States has become. Mallory said society "has chosen to allow virtually anyone to obtain a deadly weapon, but not require that he or she demonstrate the ability to use such weapons responsibly." He said such access to tools that foster using violence as opposed to language is one reason why society hasn't reached its goal of being an ideal civil society.

"Children! Use your words!"

Gun grabbers have long tried, and failed miserably, to establish even a correlation between gun ownership and violent crime. Needless to say, Mallory has zero evidence for increased gun ownership causing a decrease in civility. But it fits his worldview, so who needs evidence?

"It will be words, not walls or weapons, that will help us restore a sense of civility and a belief in our capacity to solve our problems in this troubled world," said Mallory. "The horror of the shootings in Arizona should strengthen our resolve to come together, face to face and heart to heart, to listen to each other."

Horror is not likely to encourage thoughtfulness. Sappy foolishness, forced alliteration, and evidence-free assertions will not help either.

The key to solving society's current violence problem? According to Mallory, that is something that can only come from a nationwide recommitment to resolving differences via dialogue. In order to do so, the professor said that citizens across the country must be equipped with conflict resolution tools as well as a knowledge of how to mediate during confrontation.

Mallory, a professor of education at the university, has taught courses that address leadership and being the change one wishes to see in the world. He has also performed research in deliberative dialogue and civic engagement. It is Mallory's lengthy list of experience with how a society operates that serves as a basis for his comments regarding the shooting.

There you go: just run your society like we do faculty meetings here at UNH. Problem solved.

Or, as Orwell noted: "One has to belong to the intelligentsia to believe things like that: no ordinary man could be such a fool."

Simply by coincidence, I came a relevant blog post at Reason from Brian Doherty: "Big News Events Make Blatherers of Us All." It reads as if he had Mallory in mind, although he's responding to commentary from George Packer at the New Yorker:

You can call this parasitic commentary. It doesn't say anything about the event or anything legitimately connected to the event. Rather, it illegitimately hijacks our interest and passion in the event to command our attention, and aim our emotions and anger about it where he wants to aim--while maintaining intellectual respectability of a minimal level by admitting up front there's no connection at all.

The main difference between Packer and Mallory is that Mallory doesn't maintain "intellectual respectability of a minimal level"; instead he's more than eager to assert connections where none exists.

[I've responded to the Foster's article since that was what I encountered first. If you'd prefer, Professor Mallory's own words may be found here.]