Hyperbole is the worst thing in the universe. 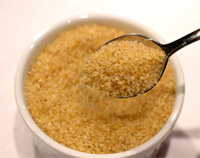 … but a big warm bun and a huge hunk of meat: