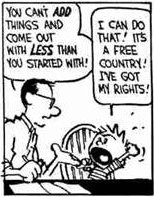 My local paper, Foster's Daily Democrat, recently published an op-ed from New Hampshire Democratic pol Mark Fernald: "Why the supercommittee was a super failure." A little Googling shows that versions also appeared in (at least) Seacoast Online, the Nashua Telegraph, and the Keene Sentinel. You can also read it at Fernald's website.

My guess is, he wants to run for something again, but that's neither here nor somewhere else. Let's take a look; I'll use the Seacoast Online version and leave in the links found there:

For Congress, the federal budget deficit is like the weather: everyone talks about it, but no one does anything about it.

The Super Committee failed to reach a budget-cutting deal for the same reason as previous efforts--their concern is with ideology, not governing.

True enough, and remarkably even-handed. Enjoy the even-handedness while it lasts.

For the forty years from 1969 to 2008, federal spending averaged a little over 20% of gross domestic product. During that period, the federal budget was in surplus for one year of the Johnson administration, and several years of the Clinton administration.

Fernald starts going off the rails here. First, a quibble: my spreadsheet skills actually show federal outlays averaging 20.6% of GDP for Fiscal Years 1969-2008; it's more accurate to say that spending averaged "a little under 21%" than "a little over 20%".

More important is what Fernald conveniently leaves out: federal receipts during that same period averaged about 18.2% of GDP. Remember that as we proceed.

Fernald actively starts misleading here. I have no desire to defend Dubya's profligate spending, but in fact, federal spending between FY 2002 and 2007 remained below 20.6% of GDP (the long term average, remember); it went to 20.7% in 2008.

And, you may remember: we were fighting an expensive war at the time.

By 2009 (the final Bush budget year), spending was 25% of GDP while revenues were just 15%. (After President Bush left office, the 2009 budget was amended. Taxes were cut and spending increased to counteract the recession, but even without these changes, the final Bush deficit would have been a record breaking $1.2 trillion.)

Fernald is stuck in blame-Bush mode, but it's hard to hide the fact that the actual FY 2009 deficit was about $1.4 trillion, all of which occurred with Democrats in control of Congress. That was record-breaking. Until we hit the budget deficit for the just-ended FY2011, currently estimated at $1.56 trillion. Fernald omits that fact, since it doesn't fit in well with GOP-bashing.

But it gets worse:

To get back to the balanced budgets we enjoyed in 1999-2001, we need to both cut spending and increase revenue so that they balance at about 20% of GDP.

We see now why Fernald omitted mentioning the long-term historical average level of Federal receipts: it allows him to slip in the notion that a 20%-of-GDP take is something that's historically normal and reasonable.

What did the numbers look like for those three wonderful "balanced budgets we enjoyed in 1999-2001"? Fernald won't tell you, but they're easy to find:

Note: outlays for these years were significantly under 20% of GDP; receipts were at levels unprecedented in peacetime.

Republicans have a different idea. They voted this year to cap federal spending at 18% of GDP. Federal spending has not been that low since 1966. Rolling back federal spending to the level of the early sixties may sound appealing until you consider it would mean the elimination of Medicare (enacted in 1965) and a steep drop in Social Security benefits.

Fernald's being kind of deceptive here too. As noted above, federal spending has been close to 18% of GDP as recently as 2001.

Fernald also falsely implies that the 18% cap on spending is the only GOP "idea." In fact there are a bunch: the so-called Ryan Roadmap sees a very gradual reduction in federal spending, not getting below 20% of GDP until 2059 (while assuming taxes can be held at 19% of GDP, forever). The somewhat more enthusiastic "Cut, Cap, and Balance Act" purports to put spending on a "glide path" down to 19.9% of GDP, not tomorrow, but by 2021.

Fernald's summary of the Super Committee's failure is predictably tendentious:

The Democrats on the 'Super Committee' proposed a ten-year plan to cut $3 billion from future expected deficits, with about two-thirds of that amount coming from spending cuts and one-third coming from increased tax revenue.

In their ten-year plan, the Republicans offered to increase taxes by $300 billion -- $30 billion a year, or less than 3% of the deficit.

For a GOP interpretation, see Jeb Hensarling, committee co-chair, in the WSJ. (Hensarling is too diplomatic to note the folly of relying on Democratic promises of future spending cuts.)

In fact, repealing the hated Bush tax cuts is something the Democrats couldn't manage to do even when they were in firm control of both Congress and the Executive. And there's zero evidence that those cuts permanently depressed revenue: in 2007, federal receipts were 18.2% of GDP, the long-term average.

The largest source of federal revenue is the income tax. You might think that income is income, but you would be wrong. Investment income -- capital gains and dividends -- are taxed at a lower rate than wages, which means that a middle income person who works overtime to make an additional $1000 will pay more in tax than a millionaire would pay on an additional $1000 in dividends. Taxing investment income at the same rate as wages would strike a blow for equity, and raise $84 billion a year.

<sarcasm>Punishing people who save and invest their income instead of consuming it? What could possibly go wrong there?</sarcasm> No, sorry. Silly, stupid idea. See here for a good argument that the capital gains tax rate should be zero.

The oil and gas industry enjoys tax breaks given to no other industry. Eliminating these would bring in $4 billion a year. Even in Washington, that is real money. The Republicans said no.

Cheap demagoguery against an unpopular industry. In fact, the biggest tax break enjoyed by "Big Oil" is a credit enjoyed by all manufacturers.

This is almost a good idea. At least it is, if you remove the silly implication that the government can extract, pain-free, an extra $100 billion a year from corporations. (And you know that $84 billion Fernald wanted to get from increased investment taxes a few paragraphs ago? Kick corporations in the teeth hard enough, and there won't be any capital gains or dividends to tax.)

But corporate tax reform is a generally excellent idea. Half a thumbs-up for Fernald here.

A financial transactions tax at a low rate -- say, 0.5% -- would bring in about $79 billion a year. Such a tax would have a negligible impact on long-term investors, but would discourage short-term trades on Wall Street, allowing the Street to get back to its function of allocating capital, rather than rewarding speculators.

… it's right back to horrible ideas. If you think the management fees on your mutual funds are high now, wait until the government starts demanding a piece off the top of each trade made by those managers. Again, Fernald shows no comprehension that all this money removed from private capital markets just might have adverse effects on the economy.

Five changes to our federal tax code -- allowing the Bush tax cuts for the wealthy to expire; eliminating preferential tax rates for dividends and capital gains; eliminating tax breaks for oil and gas; plugging the holes in the corporate income tax so that it brings in revenue similar to other countries; and a financial transactions tax -- would bring in $337 billion a year.

It wouldn't, of course. It's trite, but nonetheless true, that when you tax something, you get less of it. Fernald's multiple-pronged attacks on private investment and economic activity would result in a permanent loss of American prosperity.

And Fernald's mythical $337 billion is only about 22% of the FY2011 deficit: not even one-quarter of the way toward budget balance.

Speaking of pathetic, here are Fernald's "balanced" proposals to reduce spending: (And, by the way, here is the number of times the word "entitlement" appears in Fernald's article: zero point zero.)

Fernald (way back in paragraph two) bemoaned the "ideology" of (presumably all) the Super Committee members. But by the end, he's only blaming Republicans, and hiding his own ideology—hey, I'm just doing the math!

But in fact, his math is suspect, his facts are selective, his proposed "solutions" are unbalanced and unserious.