The Secretary has disavowed any knowledge of my actions. 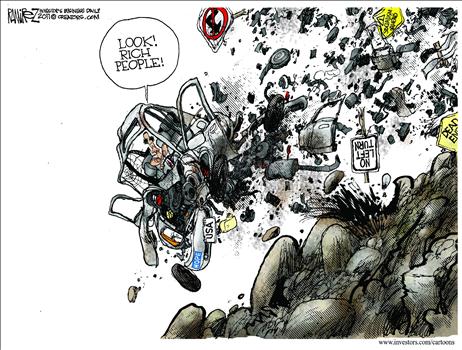 It's time to check out what's coming up for the Martin Luther King Jr. Day "Celebration" at the University Near Here.

Some things never change. As in past years:

But the details change. One can well imagine how the folks in charge want to be seen as "with it" and "relevant". So, hey, how about something that might appeal to that whole "Occupy" movement?

And so the theme this year is "The Politics of Wealth and Social Justice". The description:

In recent years, racial tensions have risen, public educational institutions are being defunded, and the gap between the rich and poor has widened. The 2012 MLK Commemorative program, The Politics of Wealth and Social Justice, will focus on the wealthy - to examine how a small minority of the population can control the political arena that is so often toxic for the working class. We'll examine poverty in the midst of plenty as incompatible with democratic values.

In other words, the usual question-begging incoherent babble, aimed at the season's trendy scapegoat: the rich. Is there anything we can't blame them for? They increase racial tension! They cause cuts to public education! They control a toxic arena! Um, whatever that means. And simply having them around is incompatible with democratic values!

[Actually, "Toxic Arena" is both an online game and a Swiss Grunge/Metal/Punk band. This is also the fault of the rich.]

The keynote speaker is The Reverend Rosemary Bray McNatt (who is identified as a "powerful social change activist"). But attendees needn't worry about the God stuff: her gig is the Fourth Universalist Society in the City of New York; you don't have to believe in much of anything besides Leftism to be sanctified there.

Googling for the writings of Rev. Bray reveals that the topic that interests her most is… herself. She wrote a book… about herself. She deems Thanksgiving a problematic holiday… for her. You don't get reasoned arguments from the Rev; she just tells you how she feels, what she likes and doesn't like. Not that interesting, and not worth spending a lot of effort to analyze.

But The Reverend is actually pretty inoffensive compared to the odious choices for speaker UNH has made in years past. (For example, 2011, 2010, and especially 2009, probably the nadir.)

And—I was surprised by this—her brother is Hiawatha Bray, who reports on technology for the Boston Globe. A few years back, Mr. Bray was targeted by the lefties at Media Matters for daring to express conservative/libertarian positions in a public forum. His job survived, but he's been pretty quiet about politics since.

I have a dream that one day, the University Near Here will just once invite someone like Hiawatha Bray up here for MLK Day.