… will hold you as it did by the lake on Naboo so long ago. 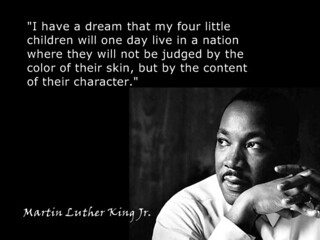 Last month, I blogged about the apparent lack of a "celebration" of Martin Luther King's birthday at the University Near Here.

Apologies, I blogged too soon; although the secretive application-only MLK Summit 2018 is still scheduled for February 23-25, UNH's Department of "Community, Equity, and Diversity" has posted this year's MLK Programs & Events. Lets take a look!

First up, on February 8, is Rev. Osagyefo Uhuru Sekou, or just call him "Rev. Sekou". Let us judge him by the content of his character. We learn that the Rev "is a nationally renowned activist, theologian, documentary filmmaker, musician and author who draws his audiences into thinking about racial, social change." But more important, he pushes all the left-wing buttons; for example, in this 2016 interview with Ebony, he's pretty hardcore:

EBONY: You say that neither Sanders nor Clinton are adequate to respond to the needs of the movement. So is voting for the lesser of two evils our only option?

OS: I think we continue to lay out a broader program that looks at the possibilities of a reimagined democracy. Right-wing populism is ultimately dangerous, but they’re not the most dangerous. It’s the anemic liberalism that refuses to take hard positions, including a spineless democratic party.

Note: from the Rev's point of view, Bernie and Hillary are both anemic, spineless liberals.

EBONY: If the democratic party is the most dangerous, how can allies work within the party to root out what you call the spinelessness?

OS: I’m not much for the discourse around allies. Ruby Sales, the SNCC activist, said, “we don’t need allies, we need freedom fighters.” Until White folks realize that racism, sexism, transphobia, classism—the way in which capitalism limits not only the life chances of Black people and brown people and Native American folks, but that they’re spiritually in danger of ceasing to be human because of White supremacy—we won’t get any real traction in this country.

But as we learned over the past few days, Nigerian immigrants to the US seem to be doing fine with their "life chances" under capitalism. A tweet from Mark J. Perry:

Some Data to Ponder Now That Calling America ‘A Land Of Opportunity’ Is Considered to Be A Microaggression pic.twitter.com/IWvSqlNUQf

It's a mystery, but perhaps maybe they have, as the Rev explains, ceased to be human.

The Rev is also a backer of the anti-Israel Boycott/Divest/Sanctions movement; back in 2014, the Washington Free Beacon was set into a small tizzy when…

The keynote speaker [Rev Sekou] at the Students for Justice in Palestine’s (SJP) national conference, hosted this year at Tufts University, delivered a bizarre, racially charged tirade that drew applause from anti-Israel activists in the audience.

The n-word was deployed, but it's OK to do that when you're the right color.

Maybe I'll go just for the music. His website says it is "an unique combination of North Mississippi Hill Country Music, Arkansas Delta Blues, Memphis Soul and Pentecostal steel guitar." That does not sound bad at all, so…

What else is going on? Well, there's "The Truth Telling Project"!

Telling your story can be a radical act.

At UNH, it means opening our community as a listening space for stories that change the way we see things.

In February, The Truth Telling Collective activists-in residence (Kristine Hendrix and Asia Dorsey) will live on campus as educators & organizers to deepen understandings of current issues impacting communities and campuses across the U.S.

Highlight your voice to help create the UNH story on race and social change. Find the link in the personal story as methodology toward campus-wide social change. Hear what journey lies ahead as we all work together for our collective liberation.

In other words, the usual meaningless (but tedious) Progressive victimology bafflegab; afterwards, they will wonder why they can't get anyone to take them seriously.

The "Truth Telling Collective" has a website where you can read more, if you can stand it. The abovementioned Asia Dorsey has a bio:

Asia Dorsey is a serene, green, radical being. She teaches the art of spreading the seeds of creativity, community, justice and just desserts to anyone brave enough to be themselves. She trades fertilizer with seed activists and stories of future through brown belly-button solidarity. Currently, this whole foods entrepreneur, educator and leader of the Five Points Fermentation Cooperative enjoys her time working with communities around ancestral culinary technology, folk science and dreamwork as a radical framework for the future. Her work is ever cultivating the partnerships needed to create bioregional food economies and medicines rooted in the ethics of people care, land care and fair share.  Formally a graduate of New York University, this Colorado wise woman, wakes up every day newly nourished by the power of everyday people, doing extraordinary things. Asia’s organizing experience includes Occupy, Movement for Black Lives and Ecological Justice.

Finally, on February 21, we have Ron Stallworth in the house. He is now retired, but back in 1978 he was a Colorado Springs cop who infiltrated the Ku Klux Klan chapter in that city. And according to his website: "The irony of this investigation was that Stallworth is… A Black man." Gutsy move!