… is pinin' for the fjords.

I haven't done this since 2011, over ten years ago. But the tools are still in place, so:

Here's a graph of Federal receipts and outlays since 1977, expressed as percent of GDP, folding in Biden's proposals and predictions. Post-2020 numbers are estimates: 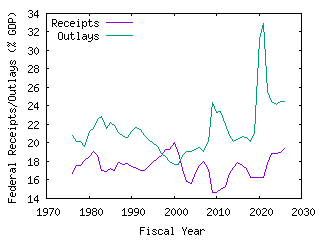 Click on the graphs for their fullsize versions. Data is here (snipped from Table 1.2 in the "Historical Tables" document) and my Gnuplot script is here. If you'd like to see the data extended back to 1930: here's the receipt/outlays graph and here's the deficit graph.

Those innocent little squiggles do not adequately portray the fiscal difficulty we're in. If it were a feature in Gnuplot, I'd animate the graphs and set them to music, something that would convey impending doom. Simply put, Wheezy Joe Biden is proposing levels of spending and taxation unseen since World War II. (And, see below, he's proposing levels of federal debt even higher than in World War II.)

Let me recycle an observation Peter Suderman made in 2011 at Reason about Obama's proposed FY2012 budget:

In his State of the Union address last month, President Obama declared that "we have to confront the fact that our government spends more than it takes in. That is not sustainable." He was right then, and unfortunately, he's still right: The budget proposal his administration is releasing today wouldn't do much to change the facts about our country's dismal fiscal future.

Echoing the administration's line that "the easy cuts are behind us," Politico's David Rogers says Obama's 2012 budget is "long on tough choices."  That depends on how you define "tough." Jake Tapper of ABC News gives those alleged hard choices some context: "At no point in the president's 10-year projection would the U.S. government spend less than it's taking in." By the president's own definition, then, today's budget plan isn't sustainable.

Back then, I called this dishonest and cowardly.

Biden isn't even pretending to give lip service to fiscal sustainability. So, in that sense: congratulations, Joe. You're more honest than Obama.

Regarding the budget, Treasury Secretary Janet Yellen said, “I believe it is a fiscally responsible program.” Let’s scale the budget figures to family size to see how off‐​base that claim is. Biden proposes to spend $7.2 trillion this year relying on $3.7 trillion in borrowing, and he proposes to push up accumulated debt from $24 trillion this year to $39 trillion by 2031. That is like a family spending $72,000 this year putting $37,000 on credit cards, and then pushing up family debt from $240,000 to $390,000 as it continues spending more than it earns. Would any financial advisor tell the family that was responsible?

Well, no, not unless the family had a fiat currency printer in the basement. That would be illegal of course. Unfortunately, what Biden proposes is totally legal.

In 2021, according to the Biden budget, the U.S. debt will reach 109.7 percent of GDP, which would blow past the previous record of 106.1 percent, just as the U.S. was coming out of World War II. It will then exceed the record every year over the next decade, reaching 117 percent of GDP by 2031.

He's got an embeddable graph, so we'll go with that, too:

What could go wrong? Well, Dan Mitchell puts it pretty succinctly (in a longer post which you should read): The Most Disturbing Takeaway from Biden’s Budget Plan

In other words, we’re looking at trillions of dollars of additional money being diverted from the productive sector of the economy and being put under the control of politicians and bureaucrats.

That does not bode well for American prosperity. Even the Congressional Budget Office recognizes this means lower living standards for our nation.

So we'll see how that works out. Not well, I fear.