… is lookin' in the sun for another overload.

It's a Pun Salad tradition (because we've done it twice before, in 2005 and 2007) to produce some simple graphs out of Table 1.2 ("SUMMARY OF RECEIPTS, OUTLAYS, AND SURPLUSES OR DEFICITS (-) AS PERCENTAGES OF GDP: 1930-2013") from the Budget's Historical Tables document. 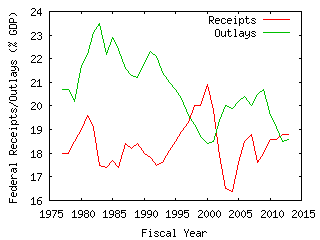 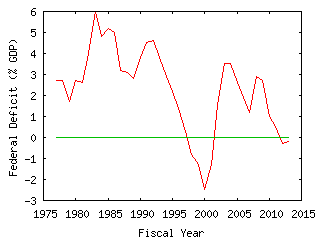 As I said last year: if you're thinking this is simple-minded, you're right. In my defense, the percent-of-GDP seems appropriate for historical comparison; it seems to be (arguably) a good measure of what we can "afford"; and, if you believe deficits "damage the economy", then it's a pretty good proxy for the level of damage.

I also have made these points before:

I almost wish I could be more cynical about this. For example, the OMB predicts a surplus in 2012. I hear you speculating, as I did: "Ha, I bet last year they predicted a surplus would arrive in 2011!"

Nope. They predicted a surplus in 2012 last year too.

Similarly, the last "actual" numbers for outlays and expenditures in the FY2009 budget are for 2007, when receipts were 18.8% of GDP and outlays were 20.0% of GDP. Said cynical me: "Surely their past estimates for 2007 were way too optimistic, lowballing expenditures and overstating revenue."

Again, nope. In the previous four years, their estimates for receipts 2007 were below the 18.8% figure. They overestimated outlays in the previous two years. There's not a lot of evidence to indicate a persistent Pollyannism at the Office of Management and Budget.

That's not to say that this years budget is free of chicanery and deceit. At Cato, Chris Edwards opines on "Bush's Dishonest and Spendthrift Budget." (Major crimes: not counting the "stimulus" being debated in Congress in the budget; only looking at one year of AMT relief when it's clear that everyone thinks an AMT fix should go beyond that.)

And—I've mentioned this before too—in the long term, beyond the horizon of the OMB budget, entitlements are a ticking time bomb. My favorite 50-year-old Harvard econ prof, Greg Mankiw, has a really good column on the topic, which you should read right now.