For some reason, this movie went unseen by me until our current NoirFest. It's mainly famous for Richard Widmark's character pushing an old lady in a wheelchair down a long flight of stairs to her demise, then giggling like a maniac. Which he is, of course.

Reader, that was a relatively underplayed scene from Widmark. He's even more unhinged elsewhere in the movie. I see he got an Oscar nomination, so…

But the "hero" is Victor Mature, playing Nick. Who gets caught after a jewel heist, but refuses to squeal on his partners in crime, so is sent up for hard time. But he gets disillusioned by the whole no-honor-among-thieves thing: his pals promised they would take care of his wife and kids. Instead, she's destitute, commits suicide, and the kids go to an orphanage.

So Nick contacts prosecutor Brian Donlevy, says OK, I'll squeal. And gets out. And takes up with Nettie, a previous babysitter for his kids. Can they start a new life together after Nick rats out his pals? No spoilers here, but I note that the movie's ending was originally different. (Don't look at that unless you've already seen the movie… oops, too late.)

If they gave out a Biggest Lips Oscar, Mature would win every year.

Hope everyone had a nice Thanksgiving. We did Zoom Feast with old people upstairs, kids downstairs. It worked out.

Among the things I'm thankful for today is the continuing brilliance of Mr. Michael Ramirez.

And there's that whole "being alive and (mostly) healthy and wealthy in 21st Century America". As much as I gripe, it beats the hell out of whatever's in second place.

Elvis is hired by asshole banker Bradley Warren to try to find a purloined copy of the "Hagakure", an extremely rare edition of a 17th century guide to Samurai life and lore. Warren doesn't care too much about the book itself, just its implied price tag: about $3 million. And the pull it gives him with his Japanese business partners.

Reader, it's a real thing.

Wisecracking all the way, Elvis visits the scene of the crime, Warren's home. He meets Warren's wife, Sheila, who throws herself wantonly at our noble detective; nothing doin', ma'am. And he also encounters Warren's surly daughter Mimi. A good guess: the book is getting peddled to the local Yakuza-infested Japanese underworld, which sends Elvis into LA's Little Tokyo. Eventually: fights, grisly murders, gunplay, kidnapping, sordid revelations, Joe Pike. And a lot of psychic turmoil for Elvis, who wonders if he could have handled things better if he'd been a little quicker on the uptake.

For some reason, as he navigates the Southland, Elvis is obsessed with telling us (seemingly) every street he's driving on. Could do without that, unless it's Mulholland Drive. But otherwise, he does a great job of detailing late-80's LA.

The inside front cover, by the way, refers to Joe Pike as Elvis's "sociopathic sidekick"? On Joe's behalf, I resent that psychologizing. He's not a sociopath, he just has an unusual personal code of conduct.

Still on our old film noir kick from Netflix's DVD service. Fun stuff! The director, Jules Dassin, was blacklisted soon after this 1949 movie was released, for being a full-fledged Communist back in the 1930s, when that was cool. He apparently bailed on the CPUSA in response to the Molotov–Ribbentrop Pact in 1939, but his stint was enough for the movie studios to dump him. (He went off to Europe, and made some pretty famous movies there. And married Melina Mercouri!)

One IMDB reviewer says this movie "is really an expose of the rotten heart of capitalism". Certainly it's kind of a downer.

Our hero, Nick Garcos (Richard Conte), is back from a post-WWII tour of exotic Asia, bearing gifts for his folks and sweetie, Polly. But one of those gifts turns out to be an utter faux pas: fancy slippers for Dad. Because—surprise!—Dad has no feet! It turns out that on one of his trucking runs bringing produce to the San Francisco market he ran afoul of crooked dealer Mike Figlia (Lee J. Cobb). And Figlia's way of dealing with obstreperous truckers is to rob and maim them.

So Nick plots vengeance. Kind of indirectly, it seems to me. He hooks up with his dad's old partner, Ed. They wangle an extra truck, deal with some local Polish farmers for a load of Golden Delicious apples, and they head off to Frisco. Every step of the way is loaded with complications and danger. (Not helping: Ed's only marginally honest, trying to stiff the farmers on the price once the trucks are loaded. Capitalism!)

Once in San Francisco, Nick drives a hard bargain with Figlia, which causes Figlia to complicate Nick's life with a hot heart-of-gold hooker, Rica. And then Polly shows up. And Nick gets ripped off by Figlia's thugs. And the partner's truck, held together with spit and baling wire,….

Well, eventually things work out, Nick and Rica go off into the sunset, San Francisco gets its apples, and capitalism is saved!

Arlo and Janis on clickbait:

I guess clickbait ads must work or they'd die a well-deserved death. I don't care much about Don Knotts, but I admit I have been sorely tempted by "Lily from AT&T Finally Confirms the Rumors". I've learned to keep my mouse away from such things. 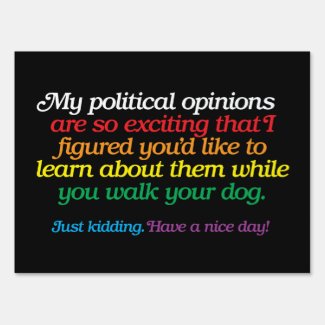 Our Product du Jour (not an Amazon link) is another yard sign I lack the courage to buy myself.