Say hello to my little blog!

The Federal Budget for Fiscal Year 2010 has been out for awhile. We continue the tradition (because we've done it thrice before, in 2005, 2007, and 2008) of producing some simple graphs from the tables provided.

It's a little more depressing this year.

(Remember: at Pun Salad, all puns are intended.)

Kvetch: The Office of Management and Budget used to provide a "Historical Tables" standalone document that showed how the new budget numbers fit into historical context. As near as I can tell, they haven't generated that document this year. Jerks. So I've taken last year's document and replaced/appended data for current/future years from Table S-1 in the new document here.

So, without further ado, here's a graph of Federal receipts and outlays since 1977, expressed as percent of GDP; post-2008 numbers are estimates: 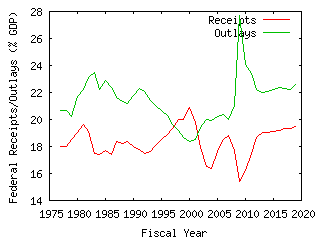 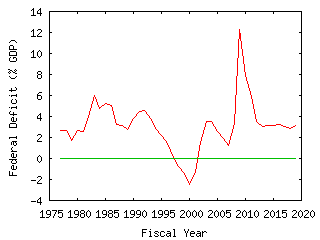 There is, of course, a stunning difference between the numbers produced last year and the ones this year. Most striking are the numbers for FY2009:

That speaks for itself, and explains why you've been seeing the phrase "uncharted territory" coming up so much in economic news.

Some other random comments and URLs: