I am on the mailing list of "Friends of Kelly Ayotte" the campaign organization spun up for the New Hampshire Republican Senator's 2016 campaign. This entitles me to receive four or five e-mail missives a week, many with a couple irritating focus-grouped tropes that seem to have been invented by the Obama campaigns:

I guess that's the name of the game these days. They'll continue until some other gimmicks become the latest thing.

But I got a paper-mail solicitation the other day. I decided to waste a stamp and send it back, filled out this way: 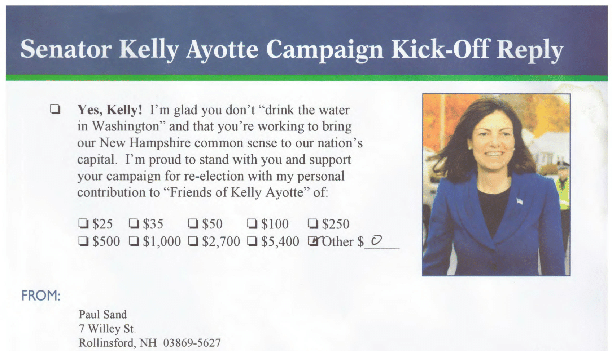 And I also composed a letter to send along explaining my snottiness. I have no idea whether anyone will read it at Kelly's end, but here it is (HTMLized):

Allow me to explain why I am donating the generous sum of $0 to Senator Ayotte's campaign. I am particularly irked on two specific points:

I have written to Senator Ayotte on these two issues and have received her unconvincing boilerplate replies.

Although I find Senator Ayotte's positions on those two issues particularly wrong-headed, her record shows that the problem is more general. Consider her scorecard from FreedomWorks on key issues of economic freedom. Her lifetime score (http://congress.freedomworks.org/legislators/kelly-ayotte) is a mediocre 65%. And it's only that high due to her outstanding voting record in her first year. Year-by-year, her score looks like this:


The scorecard from the Club for Growth (http://www.clubforgrowth.org/) shows a similar dismal trend:


In addition her current rating from Heritage Action (http://www.heritageactionscorecard.com/members) is a very low 29%, near the bottom for Republican senators.

Given this, your claim that Senator Ayotte does not "drink the water in Washington" is laughable. My gut feeling is that she is clearly compromising the principles she ran on in 2010, cynically attempting to position herself as a "moderate" in order to be re-elected. I have no current enthusiasm for voting for her, let alone supporting her campaign financially.