Seen two presidential candidates in less than a week, so I'm a little concerned about my mental health. If you find me drooling and naked in some alley, could you please call my wife?

Anyway, Ohio Governor John Kasich visited the University Near Here on Thursday afternoon. His venue was the "Great Room" of the Peter T. Paul College of Business and Economics; he filled it up pretty easily: 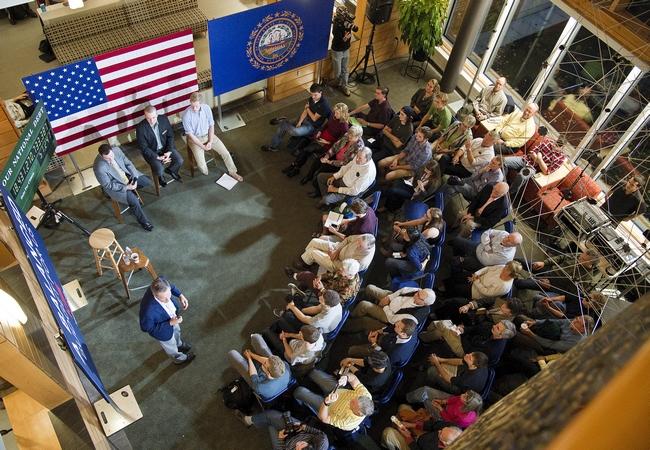 And, once again, I can prove I was there: that's me in the yellow sweater by the windows. (This pic shamelessly ripped off from the story in Foster's Daily Democrat. I'm living on the copyright-infringement edge here.)

Up-front disclaimer: Kasich is not my first choice. In fact, he's probably in the third tier of my preferences, in the "probably slightly better than Hillary" group. (Also there: Jeb and Christie.)

We kicked off with the Pledge of Allegiance (something Rand Paul did not do). I went along, but just for the record: the Pledge is creepy and socialistic.

Kasich's issue was the budget deficit. He was against it. (I enthusiastically agree.) He claimed that he had eliminated the deficit when he was in Congress. (Arguably true, even given the propensity of politicians to exaggerate: he was chair of the House Budget Committee 1995-2001, and the budget was in surplus for fiscal years 1999-2001.) And he also pointed to his success in turning around Ohio's budgetary woes. (But when viewed from a libertarian perspective his record there is disappointing.)

My subjective impression was that Kasich came off more than a little condescending. And also vague. (He has been less vague elsewhere: this AP story describes some of his concrete proposals both on the spending side and the tax side. I have no idea what the pixie-dust content of the plan is.

He did manage to trot out the old warhorse: a Balanced Budged Amendment to the Constitution. This irritates me. Let me trot out a rant I've made in the past:

Whew. I feel better. Back to Kasich.

Another rough point was his denigration of "outsiders". He refused to mention their names (Trump and Carson, of course), but he analogized the situation to a poorly-performing football team. The fans are understandably frustrated, and come up with a solution: let's go up into the stands and bring down some likely-looking spectators to play on the team instead!

Governor Kasich, did you just imply that Trump/Carson supporters are the kind of idiots who would follow such an ill-advised strategy? OK, so you might be correct. But you need their votes should they ever come to their senses. Maybe insulting them is not the best strategy.

Another thing I noticed was a lot of local pols in the room: ex-Senator Gordon Humphrey (Gordo has a beard!), Ed Dupont, Tom Rath, a couple others I vaguely recognized but not enough to put names to.

Quibbles aside, Kasich did a decent job presenting his ideas to a mostly sympathetic crowd. One young lady tried to filibuster him on Planned Parenthood, but he just said he didn't like 'em and deftly moved ahead. As things wound up, a student group made an inept attempt at disruption. They stood up and started chanting something about oil; they were sitting together a couple rows in front of me, even I couldn't figure out what they were saying, so I doubt anyone else could at the time. But "fortunately" they self-videoed and posted to Facebook. In all their glory, ladies and gentlemen, the vocal stylings of "Divest UNH":

To quote P.J. O'Rourke:: "Earnestness is stupidity sent to college."