Our Eye Candy du Jour is from xkcd: Animal Songs: 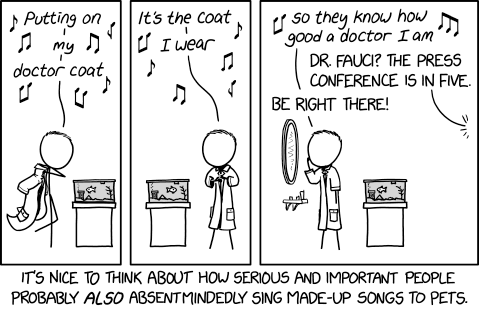 Mouseover: "Dr. Fauci is not permitted to have a cat, because as director of the National Institute of Allergy and Infectious Diseases, his petting one would be considered giving aid and comfort to an allergen."

While I was reading this, I had a meta-thought run through my head: There's nobody better than Michael Connelly at getting me to turn book pages. (C. J. Box comes pretty close, maybe a tie.)

I'm still a skinflint, though: I bought my hardcover copy for $7.63, a very well-treated book originally purchased by the library in Bellevue, Nebraska. (Which is, not that it matters, under 13 crow-flies miles from the house where I used to live.) Congratulations, Bellevue Library patrons for your gentle book manners!

Anyway, there's a lot going on here. It is a collaboration between old retired police detective Harry Bosch and young active LAPD detective Renée Ballard. Case 1 develops when Harry's old mentor on the force passes away; at the post-funeral gathering, the widow bequeaths Harry with a stolen "murder book" her husband has (illegally) squirreled away in his study for years. Leaving Harry with two puzzles: who killed the drug-addicted ex-con young man in a Hollywood alleyway thirty years ago, and why did Harry's mentor abscond with the murder book?

Meanwhile, Renée is looking at the burned corpse of a homeless man, who has perished when a kerosene heater was knocked over and set fire to his tent and sleeping bag. Accident? Or … well, come on. It's only a matter of time until Renée figures out that it's foul play.

But wait, there's more. Harry's also called in by his half-brother, Mickey Haller. Who is defending a seemingly hopeless case: the schizophrenic defendant confessed to knifing a judge in a public park, and his DNA was found on the judges post-mortem fingernails. Mickey's just interested in getting his client off the hook, but Harry's wondering: if not the schizo, whodunnit?

It all winds up pretty neatly, with a few plot threads available for the next installment. Note to evildoers: if Bosch and Ballard get on your case, just confess. It will save everyone a lot of hassle (unfortunately it wouldn't make a great book).