… plenty of peeves, but they aren't pets.

[UPDATE: 2019-10-15. I got a GitHub account, and am playing around with it. The script can now be downloaded from there, and I've updated the links below.]

I got a "binary-coded decimal clock" (made by the good folks at Anelace Inc.) a few Christmases back. Picture via Amazon link at right, if you're not seeing it, turn off your ad blocker. The time shown is 10:48:36.

[And make no mistake, Anelace is a Good Company. I shorted out the power supply adapter by clumsy accident. I emailed, asked where I could buy a replacement, they just sent me one, free. Whoa.]

When I worked at UNH, I kept it in my cubicle as a conversation piece. The thing that sticks in my mind today is how many IT managers needed me to explain what it was and how to interpret the LEDs. No geeks they.

Shortly afterward, on a lark, I wrote a small Perl script to simulate the clock display in a terminal window. I recently exhumed and updated the script to more modern standards. It's short and (I think) fun.

Here's a screen snapshot of what it looks like in action. The red dots inside indicate "on" LEDs. The LED array is updated every second, as is the time displayed at the bottom. 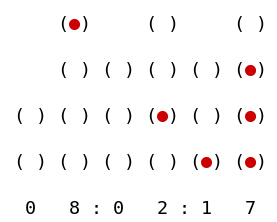 The script is available at GitHub. I hope.