Here's a graph of Federal receipts and outlays since 1977, expressed as percent of GDP; post-2010 numbers are estimates: 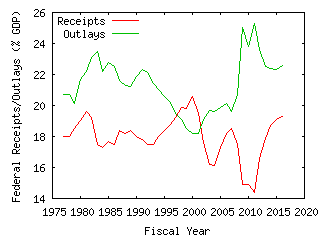 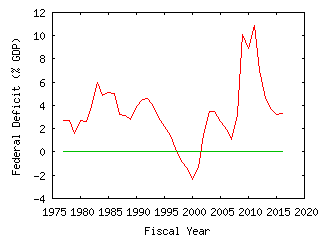 Click on the graphs for their fullsize versions. Data is here (snipped from Table 1.2 on this page) and my Gnuplot script is here. If you'd like to see the data extended back to 1930: here's the receipt/outlays graph and here's the deficit graph.

Those innocent little red and green squiggles do not adequately portray the fiscal difficulty we're in. If it were a feature in Gnuplot, I'd animate the graphs and set them to music, something that would convey impending doom.